Reynolds Campaign Launches New Television Ad: “This Is For”
Gov. Reynolds: When you work hard for every dollar, every dollar counts

[Des Moines] – Today the Kim Reynolds for Iowa Campaign launched its third television spot of the campaign titled, “This Is For.” The 30-second ad will begin airing on television and digital platforms this week, and highlights how Governor Kim Reynolds understands the issues Iowans face because she has faced them herself.

“Iowa families are working harder and harder to get ahead, and that’s why we are cutting taxes and fighting for lower healthcare costs,” said Governor Kim Reynolds. “To every mom, dad, farmer, and small business owner, we are going to fight for you every single day. I know that when you work hard for every dollar, every dollar counts.”

“Governor Reynolds knows what it’s like to balance a checkbook, to work nights and weekends to make ends meet,” said Hooff Cooksey, campaign manager for the Reynolds campaign. “That’s why she’s fought for lower taxes, and working to lower the cost of health care coverage. Her opponent has a very different story, and he’s looking backwards – hoping to undo all the positive success we have seen across the state.” 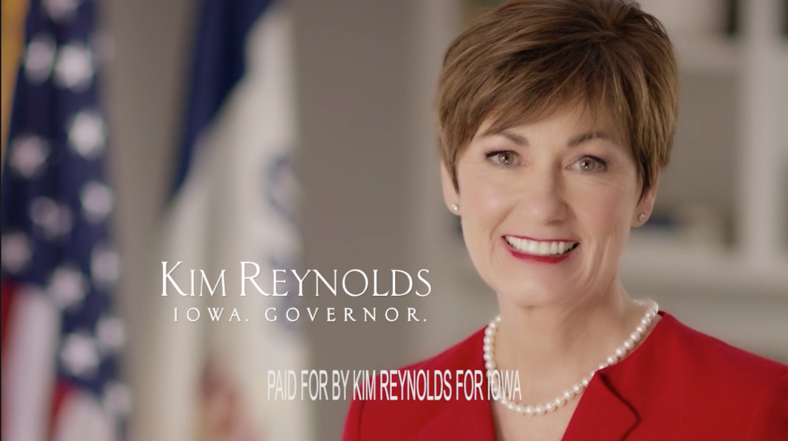 Check out the brand new TV ad and more at www.theiowastory.com.

For all the waitresses and grocery checkers… and for every small town girl with big world dreams.

I’m Kim Reynolds and long before I was Governor, I was pouring coffee at Younkers and checking groceries at Hy-Vee.

That’s why we are cutting taxes and fighting to lower healthcare cost.