Governor Kim Reynolds is the 43rd governor of Iowa and has the distinction of being the first woman elected to the state’s highest office in November 2018. Under her leadership, Iowa continues to be a state that values freedom.

Whether it’s opposing COVID mandates, getting kids back into the classroom, or letting Iowans keep more of their hard-earned money, Governor Reynolds leads by putting her faith in people. She has also taken bold action to keep Iowa moving in the right direction, delivering on promises she made on the campaign trail:

Kim has never forgotten the values she learned growing up in small-town Iowa. Values like faith, family, and hard work. Under her leadership, Iowa is moving in the right direction and has proven to be a stark contrast to Joe Biden’s failed presidency of mandates, inflation, and radical policies.

Kim Reynolds graduated from Interstate 35 Community Schools in 1977, married her husband Kevin Reynolds in 1982, worked and raised three daughters, and completed her bachelor’s degree from Iowa State University in 2016 while serving as Lieutenant Governor. Kim and Kevin are the proud grandparents of 11 grandchildren.

Adam Gregg serves as the 47th Lieutenant Governor of the State of Iowa.

Adam was born with a heart for public service. He previously served as the Iowa State Public Defender where he drew praise for his leadership guiding the agency responsible for providing the Constitutional right to counsel.

Born in Hawarden, Iowa, Adam is a graduate of Drake University Law School and Central College in Pella. He is married to his high school sweetheart Cari and they have two young children. The Greggs attend Johnston River of Life United Methodist Church. 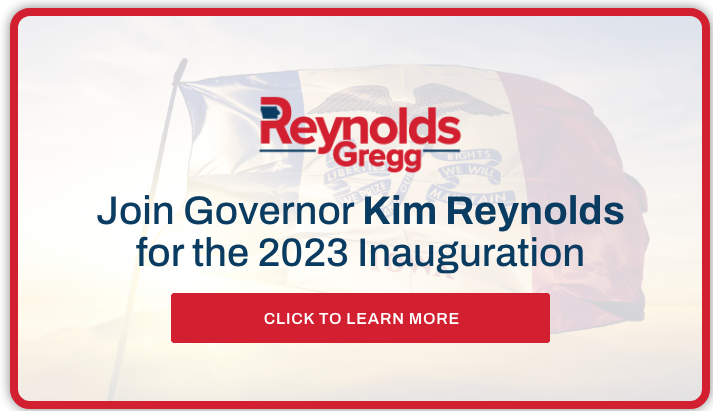